On 15th March 2010 the Pitlochry Tartan was registered with The Scottish Register of Tartans The tartan, which is blue, green and purple with a white and yellow strip.

It has been designed by Janet Washington, of Claire Charles Designs, with the support of Pitlochry Community Council. Ms Washington said: “Not everyone wants to wear a clan tartan, especially if they have no affiliation with a particular clan, but they do like to wear tartan. Also, Pitlochry's location in Highland Perthshire means there is an opportunity to have an attractive local tartan that can be used commercially too.”

The idea began with a conversation in Janet Washington's shop, Claire Charles Designs. Enthusiastically Janet commented to Kathleen Scott, Chairman of the Local Community Council on the lack of provision of a tartan for local people who did not necessarily want to wear a clan tartan but who were proud of their local heritage.

Spurred to action, contact was made with Blair Macnaughton, House of Edgar, Perth, manufacturers of quality woollen tartans and David Borland, Macnaughtons of Pitlochry who advised on colours and design prior to the final design by the House of Edgar.

The Pitlochry and Moulin Community Council had also agreed to become involved.

Finance came in the form of a grant from Perth and Kinross Council to enable the project to proceed. With local professional and legal advice, after two public displays and input from the pupils at Pitlochry High School, potential designs were voted on by members of the local community and the Pitlochry Tartan was chosen.

Largely purple and green with blues and a gold stripe the choice was never in doubt. The winning tartan received more than double the votes of all the other tartans combined.

The gala event inspired and produced by Janet Washington, introduced a range of her outfits fashioned in the Pitlochry Tartan. These were shown by very elegant local models. Tartan trousers for men, manufactured by Macnaughtons of Pitlochry, were also handsomely modelled. 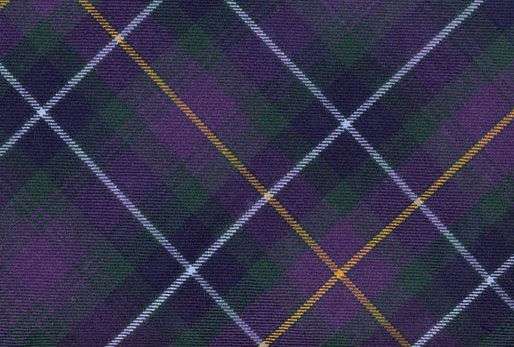 Registration notes: The Pitlochry tartan was selected by the Pitlochry and Moulin Community Council to represent this particularly beautiful part of Highland Perthshire and as a celebration of the Year of Homecoming 2009. It is for the use of community residents and visitors alike.